In our next installments, we will take a look at the “bubble issue“ from a national perspective and consider whether Prohibition was responsible for the demise of local breweries. Make sure you are on our mailing list so that you will be notified when the next installment comes out. 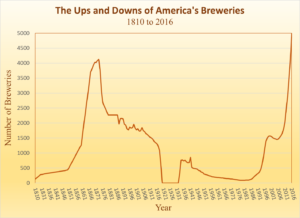 What about the fall that followed? Is the subsequent drop in breweries relevant to or current situation? The 100-year decline in the number of breweries that begin in the late 19th century saw a move from neighborhood breweries to large-scale factory production. Railroads and refrigerator railcars made national distribution possible. Cost efficiencies of large scale production made local breweries less competitive. Attitudes regarding “factory produced” were much different than they are today. In an era with minimal regulations or oversight, some local breweries produced not just bad beer, but dangerous beer that could make you sick.  In contrast, “factory produced” had positive connotations, suggesting cleanliness, consistency and modernity.

The reasons for the previous contraction in the number of breweries would not seem to apply today. In fact, the opposite seems to be true: we are in a long-term consumer trend favoring local, craft, and artisanal products: across the economy “we are in the midst of a craft revolution” that is being led by craft beer (Goldman Sacks, 2016). Big Beer continues to lose market share at a rate of about 2% per year. It is true that the increase in the number of craft breweries is happening more quickly than the growth in the craft share of the market, so competition is increasing within the craft beer community. Consequently, we are seeing declining profits and layoffs at some of the large, nationally distributed craft breweries (Market Watch, 2017), which some have seen as a sign of a bubble ready to burst. Instead, the drop in the Big Beer share of the market and that of nationally distributed craft beers can both be seen as signs of the prevailing trend toward local beer, moving us closer to the state of affairs in the 1870s, when every neighborhood had its own brewery.

As more and more people decide to try their hand at opening a brewery, it is logical to assume that not all new breweries are going to produce an excellent product and not all will survive. But as long as craft beer continues to grow market share and as long as the public gravitates toward local offerings, the number of breweries will be sustained or will increase.

In our next installment, we will look at the effect (if any) of Prohibition on the number of breweries in the country.

Do you see it differently? Please weight in, we would love to include your comments.

Another factor that may allow for craft beer expansion is changing demographics. Young people are more likely to be craft beer drinkers than older people. To put it crudely, Bud drinkers might begin dying off, to be replaced by younger drinkers who will favor craft beers. Craft beer is also looking to expand its demographic, which is still fairly restricted now. Only about 25% of craft beer drinkers are women and minority representation is tiny. If craft beer is able to make inroads with these populations, significant expansion of sales could be realized, creating room for further expansion of the number of breweries..

BA: In 1998, only 13% of women had tried a “microbrew”. In 2014, young women 21-34 now over-index on craft (meaning that they consume a higher % of craft than they represent as a % of the population). According to new panel data from Nielsen, this group of women alone now consumes almost 15% of total craft volume. This may not be surprise for those who have been following beer trends for a while. As early as 2006 a Morgan Stanley report stated that 37% of weekly ‘craft beer’ drinkers were women whereas only 31% of weekly ‘beer’ drinkers were women. That said, it represents a fundamental sea change from 15 years ago.  https://www.brewersassociation.org/insights/demographics-of-craft-beer-lovers/?type=success&msg=You%20have%20been%20logged%20in%20successfully!

next: Myth? Prohibition was responsible for the demise of local breweries