In the mid-19th century, German immigrants were fleeing turmoil in Europe. At one point, 33% of Pennsylvania’s population came from Germany. Of the thousands of German immigrants who came to Pennsylvania, many brought family beer recipes with them and established breweries here. Ultimately, the anti-immigrant sentiment would be a significant factor in beer’s inclusion in Prohibition.

From 200 years of brewing in Allegheny County, by Richard Ober and Robert Musson

Beer historian Rich Wagner makes the case that John Wagner brought the first lager yeast to Philadelphia in 1840 and was the first in the U.S. to brew lager beer. By the mid-19th century, English ales were giving way to German lagers. 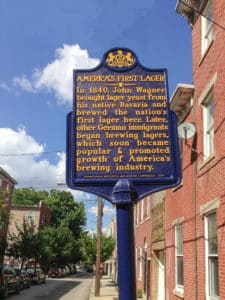